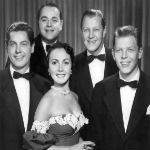 The Modernaires is an American vocal group, best known for performing in the 1940’s alongside Glenn Miller. The Modernaires began in 1934 as “Don Juan, Two and Three,” a trio of schoolmates from Lafayette High School in Buffalo, New York. The members, Hal Dickinson, Chuck Goldstein, and Bill Conway, had their first engagement at Buffalo’s suburban Glen Falls Casino, with the Ted Fio Rito Orchestra’. They then joined the Ozzie Nelson Band, and became known as “The Three Wizards of Ozzie.” They next recruited Ralph Brewster to make a quartet and, performing with the Fred Waring Orchestra, became The Modernaires. Recordings with Charlie Barnet’s orchestra in 1936 did not interest the public but brought them greater industry exposure, and in 1937 they joined the George Hall band, soon moving on to the Paul Whiteman radio show. They recorded many of the classic songs of that era, a few with Jack Teagarden, as part of the Whiteman orchestra in 1938. In October 1940, Glenn Miller engaged them to record It’s Make Believe Ballroom Time, a sequel to the original Make Believe Ballroom, which they had recorded earlier for Martin Block’s big band show of the same name, on WNEW New York. In January 1941, Miller made The Modernaires an important part of one of the most popular big bands of all time. Paula Kelly was added to the Miller band between March–August 1941; she and Modernaire Hal Dickinson had married in 1939. The group had ten chart hits in 1941 after appearing with Miller’s orchestra in the movie Sun Valley Serenade. Songs made popular by Miller and The Modernaires included “Perfidia,” “Chattanooga Choo-Choo,” with Tex Beneke (the first-ever “gold record” with over one million copies sold), “I Know Why,” “Elmer’s Tune,” “Serenade In Blue,” “Connecticut,” and “Kalamazoo” with Beneke, among others.