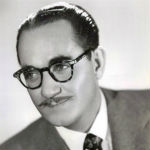 Shep Fields (September 12, 1910 – February 23, 1981) was the band leader for the “Shep Fields and His Rippling Rhythm” orchestra during the Big Band era of the 1930s. He was born in Brooklyn, New York on September 12, 1910. He played the clarinet and tenor sax in bands during college. In 1931 he played at the Roseland Ballroom. By 1933 he led a band that played at Grossinger’s Catskill Resort Hotel. In 1934 he replaced the Jack Denny Orchestra at the Hotel Pierre in New York City. In 1936 he was booked at Chicago’s Palmer House, and the concert was broadcast on radio. Fields was at a soda fountain when his wife was blowing bubbles into her soda through a straw, and that sound became his trademark that opened each of his shows.